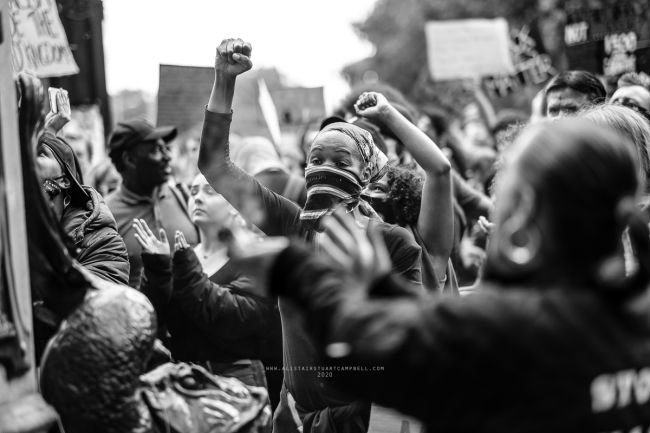 There’s no hard and fast rule to photographing events, but I’ve always felt a certain amount of decorum is needed. Every photographer is different; you’ve got your 200mm snipers, your wide-angle up-close-and-personal hitmen, and your working-within-the-shadows ninjas.

I first learned my craft of documenting a day when I worked on low budget films as a behind the scenes photographer. I learned the art of studying people, their behaviors and predicting what was likely to happen next.

I typically start off in the morning or the night before by checking road closures, making sure my phone and a power bank are fully charged. Probably 99% of the time I will take a single lens to go on my Fujifilm X-T3, typically the 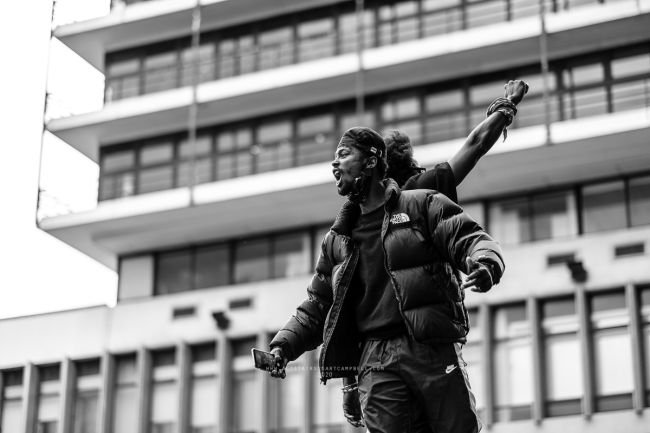 For me there are two ways to document events, and until I get there I never know which way it will go. The first one is to get in the mix and become part of the protest. This usually leads to pretty visceral photography all around you – and is one of the main reasons not to allow yourself to get stuck shooting on a prime lens.

The second is to hang back, enabling you to be a little more free and pick off moments as you sense them happening in front of you.

Black Lives Matter had a feeling in the air unlike anything I’ve felt before. People usually start to form crowds in the city centre across from Bristol Hippodrome. The numbers are sparse and this is usually the calm before the storm – a place where, if you wanted, you could easily approach people to get shots you’ve set up of protestors holding signs or at other events showing off outfits they’ve created.

Black Lives Matter did not feel appropriate for me to start asking people to pose with their signs while I quietly yelled “Say cheese!”. In fact, I hardly ever speak to anyone at events – I don’t feel it’s right for me to set anything up or influence anyone’s behavior at all. This was a day to be silent, listen and document what was happening. 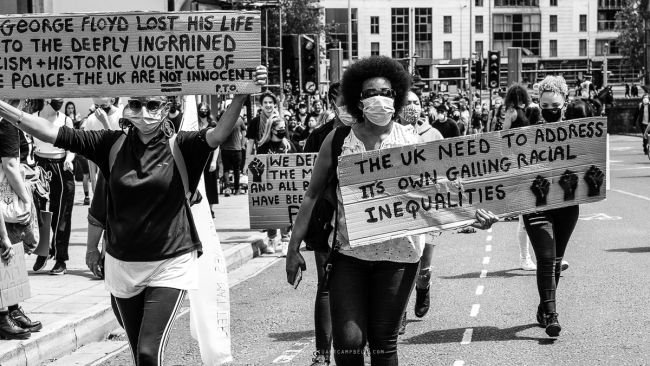 Slightly up the steepest shopping street in Europe, everyone will now congregate on the College Green – which is where I decided I’d stay back, operating in the shadows trying to be respectful and understand what was happening. There was about an hour of poems, speeches and information, finally ending with the names of black victims that had died in police custody preceded by a five-minute silence.

At this time everyone was kneeling, and it felt only right that I do the same. I observed other photographers carry on – that’s fine, but not for me. It’s times like these I often make eye contact with people, and they usually look back as if to say, “You’re alright.” These moments usually lead to other opportunities later on.

After the silence, everyone got up and swarmed back towards the main streets. It doesn’t happen often, but I got caught right in the middle of about 10,000 people. I could have pushed my way out, but instead I just stayed.

When this happens you’re unlikely to get any photos worth talking about, so I usually take this time for a mental break. At best you maybe be able to raise your camera up high and get a shot to show the size of the crowd. Sometimes it’s good to just listen to what people are saying, you may catch a whiff of something happening elsewhere to document after the march. 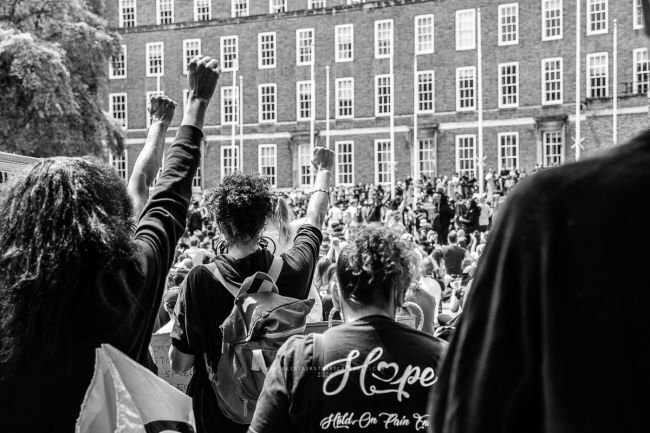 To the march itself, and this is where people will mainly photograph signs being held up high. I’m guilty of it, too, but this is a time where you can become vigilant and pick out images that others may have not seen. Onlookers – sometimes supportive, sometimes not.

A march can go by quickly, so it’s best not to root yourself to one spot. Sure you’ll photograph lots of different people, but all your photos will all feel the same. This is why we wear some lovely comfy and swift-footed sneakers. Be calm but be on the move all the time; let your eyes do the work, so your legs can be efficient.

From being observant in the speeches I’ve now identified about 10 or 12 key people that you just know will be the most passionate, the most vocal and the center of the day. Follow your instincts and make good decisions; if you do this you can position yourself in the right place, ahead of the right time.

This march was a little different – it began following a traditional route, but then became split. One mass group had started to take down the statue of Edward Colston, a slave trader born in 1636 whose statue has caused divide in the city in recent years. I should have known, but I had become carried away with three white men who were now fighting with some protesters about 50 yards away. 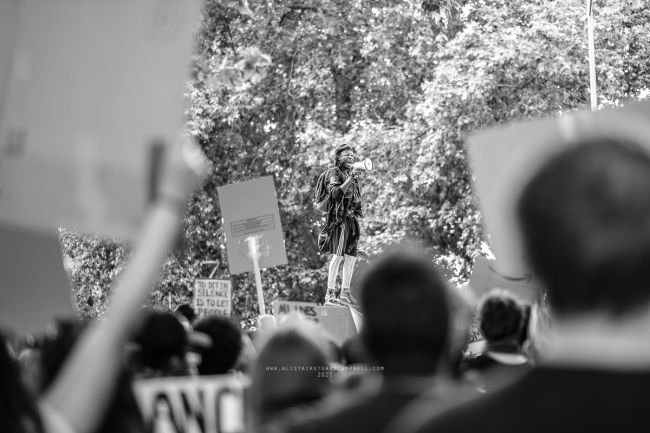 It was far too late for me to get to the statue, so I let it go. I also try not to worry about getting images that 100 other people have anyway; it turns out that 30 minutes later it was on the national news, so I think it was pretty well covered.

The aftermath of any moment will often leave opportunities for photos. The statue now toppled, protesters were taking turns to speak to the crowds. In my opinion this was far more powerful than the moment that some metal hit the floor. The pulling down of the statue felt tribal and instinctive, but the words that came afterwards felt heartfelt and passionate. Delivered with charisma, they were compelling, direct and most importantly heard.

I try not to shoot too many images on the day, but a little like wedding photography the more things happening the more you will shoot. I never look at the images in the heat of the moment. Why would you need to? If something is overexposed or out of focus then it’s gone forever. Concentrate on shooting photos, not reviewing them.

In these aftermath moments I did switch out my zoom for my 56mm. I’ve never used it at an event like this before; having such a shallow depth of field enabled me to single out images of people among small crowds, or render backgrounds a blur. Once I’ve decided to switch lenses, I rarely revert back. 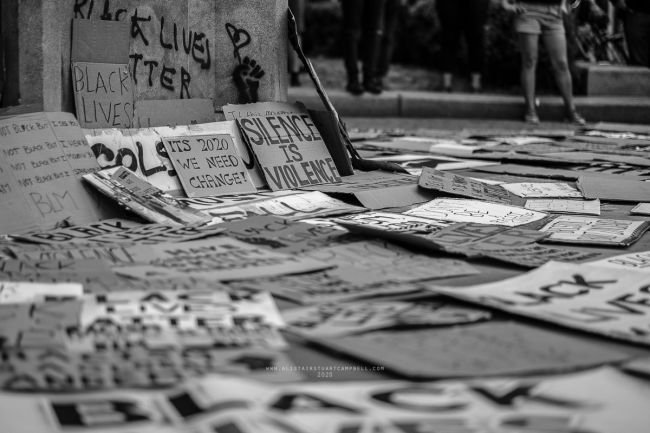 By this time the protesters had dragged the statue about 400m down the city and thrown it in the river. I noticed that people were laying their protest signs around the plinth where the statue had previously stood.

Despite my usual habits, I couldn’t walk away without switching back to my wider lens to document the final moments of that day. I walked down to the spot in the harbor where the statue went in, I took a shot of the water anyway, and as I walked home I noticed the train track style marks in the concrete still remained where they had dragged it so far.

Whether you are for or against an event, your job is to simply be there and document it. Try not to become involved, try not to stage anything. I personally wouldn’t even reposition a sign for a better composition; it’s not real. Observe, listen, experience and document as truthfully and objectively as you can.