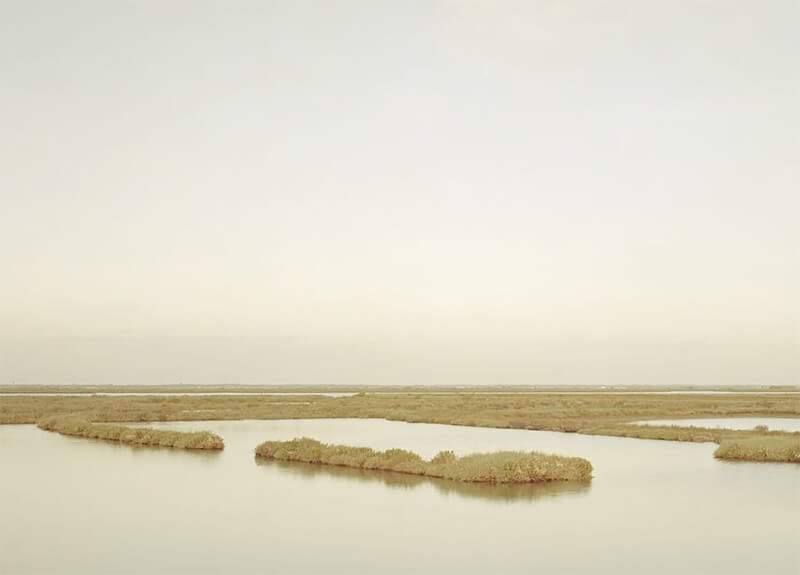 Esser is most widely recognized for his distinct approach to the genre of landscape photography. in his production of eternal images imbued with the sensitive vision of a Romantic. Rendered both in large-format and more intimately-scaled compositions, his serene, verdant photographs depict moments rooted historically, yet also in the present. Esser’s work builds upon a rich tradition of 19th century photography characterized by the grand Realist landscapes of French masters Gustave Le Gray and Édouard Baldus, as well as the great chronicler of the American west, Carleton Watkins. Whereas the approach of these forbearers realized still photographs entwined to their respective eras, Esser’s timeless images are detached from such specificity, evoking the everlasting.

The pastoral glow cast from the artist’s diffuse lighting is a hallmark of Esser’s bucolic photographs. His pictures capture the essence of a dream-state, a space which only poetry or prose can accurately describe. In many ways, Esser’s photographs share an emphasis on the atmospheric language found in the Pictorialist masterworks of Peter Henry Emerson. Like Emerson, Esser’s work involves a manipulation of what could otherwise be a straightforward photograph as a means of creating a picture rather than strictly recording nature. This characteristic is especially underscored in Esser’s most recent body of work, in which an elaborate hand-coating process is employed. The artist carefully applies layers of silver onto sensitized copper plates crystallizing the photographic image, which is then further enhanced by brushstrokes of shellac creating a distinctive surface sheen. The resulting objets d’art are luminous and precious, holding the viewer’s gaze and leading them into a time and place both distant yet familiar.

Esser’s formal education has been the study of landscape photography. As a student of Bernd Becher at the Düsseldorf School of Photography in the 1990s, his concerted practice does encompass aspects of the documentary method promoted by his instructor; however, Esser’s work departs from Becher as well as that of his fellow students in his fruitful endeavors to encapsulate the tenor and fundamental mood of a landscape. His resulting efforts feel less starkly categorical, and undoubtedly share more in common with the sensibility of 17 th century Dutch landscape painters and English Romanticist JMW Turner. Inspired also by the prosaic literary descriptions of nature expressed between Flaubert and Maupassant, Esser’s photographs are almost exclusively devoid of human presence. Fascinated with postcards since childhood, Esser’s work is often imbued with the experience of travel and exploration. He seeks forgotten stretches of the European countryside, capturing pungent views along the Seine and in the fertile Loire valley, creating illuminated souvenirs which embody his enchantment with the landscape and unique romantic vision.

Born in Stuttgart, Germany in 1967, Esser spent the majority of his childhood in Rome, Italy. He moved to Düsseldorf in 1986 and attended the Kunstakademie Düsseldorf under Bernd Becher from 1991 to 1997. The artist continues to live and work in Düsseldorf. Esser has had countless solo exhibitions worldwide and participated in numerous biennials and group exhibitions, namely ILEANA SONNABEND, AN ITALIAN PORTRAIT at the Peggy Guggenheim Collection in Venice in 2011. His works are represented widely in notable private collections and within international institutions including the Solomon R. Guggenheim Museum, New York, The Metropolitan Museum of Art, New York, Stedelijk Museum, Amsterdam, Stiftung Museum Kunstpalast, Düsseldorf, and Centre Georges Pompidou, Paris.