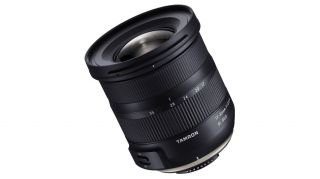 Announced this morning, the new Tamron 17-35mm F/2.8-4 Di OSD is an ultra-wide lens designed to be as light and transportable as possible.

It weighs just 460g and measures just 90mm in length – the Nikon version, that is; the Canon edition is a shade longer at 92mm – but still manages to pack in an optical construction of 15 elements in 10 groups, including four Low Dispersion elements to minimise axial chromatic aberrations.

Two GM (Glass Molded Aspherical) elements are also present to cut down on distortion, and Tamron has added a BBAR coating (broad-band anti-reflection) to cut down on reflections. The lens also uses a seven-bladed diaphragm, which should produce smooth bokeh, while minimum focusing distance is 0.28m.

It boasts moisture-resistant construction too, providing a layer of protection from inclement weather. The entire surface of the front element has also received a fluorine coating, with water- and oil-repellent qualities, which should also make it easier to clean.

The ‘OSD’ in the lens’s name stands for ‘Optimised Silent Drive’, an autofocus system that promises to operate not only quickly, but also near silently, making it useful for situations where you want to be unobtrusive. Tamron also says the lens should prove capable at tracking moving subjects.

Tamron anticipates firmware updates for the lens in the future, and, as such, it’s compatible with Tamron’s TAP-in Console, an optional accessory that allows the lens to be connected to a computer via USB-C, thereby making it easy to download and install firmware updates.

The new Tamron 17-35mm F/2.8-4 Di OSD is going to be available for Canon and Nikon mounts with a price of £629 / $599. The Nikon version is going to be released on September 4, 2018, and the availability for the Canon will be confirmed at a later date. In the meantime, visit Tamron’s website for more information.