In addition, at the launch of the Fujilfilm X100V it was officially revealed that the Fujifilm X-T4 will be launched on 26 February, the day before the Japanese CP+ trade show begins… The Fujifilm X100V and the Fujifilm X-T200 have now been launched.

ORIGINAL STORY: It looks as if Fujifilm is aiming to start the year strong if these rumors are anything to go by. Apparently, we could be seeing the Fujifilm X-T4 and the Fujifilm X100V as soon as early February, according to some intriguing digital whispers we’ve recently heard.

However, that’s not the only exciting Fujifilm news we’re likely to see. There’s also a mystery camera, currently only known as ‘FF190003’, that we could also be learning more about once February begins.

As sourced from website Fuji Rumors, apparently the “FF190004” and “FF190005” were registered with the Chinese government’s MIIT (Ministry of Industry and Information Technology) on January 8th. These names are widely accepted to be code for the Fujifilm X-T3 successor (possibly to be named Fujifilm X-T4) and the Fujifilm X100V.

However, according to Fuji Rumors, “the data release date of FF190003 registered in the FCC (Federal Communications Commission) certification has been re-extended from January 24 to February 4.” 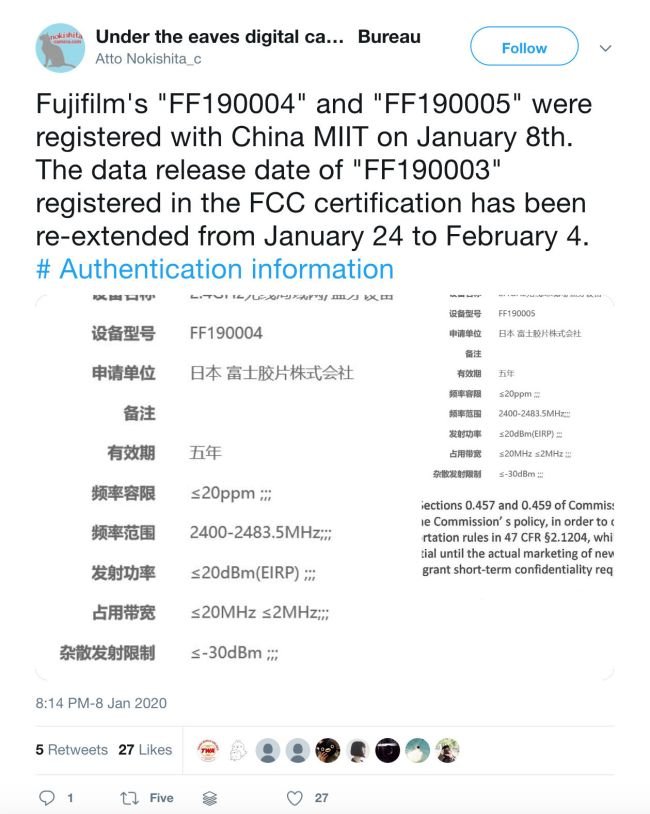 As Fuji Rumors notes, with such a small adjustment in the data release date, it’s unlikely that there’s anything more serious going on than simply shuffling everything together to be announced on February 4. However, it does mean that the beginning of February is shaping up to be a very interesting time indeed.

So what are we looking for from these new cameras? Well, with opinion split on the  divisive Fujifilm X-Pro3 fold-down screen that was designed to keep photographers in the moment rather than continuously ‘chimping’, we’d be surprised to see something similar in these forthcoming cameras.

In terms of the Fujifilm X-T4, in-body image stabilization is likely to be at the top of the list for most Fujifilm enthusiasts. Meanwhile, the Fujifilm X100V compact camera is rumored to be receiving a 26.1MP CMOS sensor and an upgrade to its lens.

With less than a month to go until February 4, we can’t wait to see how these three new Fujifilm cameras shape up.