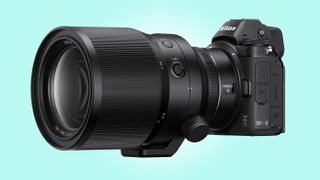 Nikon’s NIKKOR Z 58mm f/0.95 S Noct lens has been something of a centrepiece in Nikon’s Z system since the line was unleashed almost a year ago, but the lens has been under development since then.

But this looks set to change with the news that pre-orders for the lens are apparently now being accepted in some stores.

Nikon Rumors claims on its Twitter account that a reader of its site spotted the lens with pre-order signage at a shop in Sydney, while a comment underneath the post claims the lens was also on display at a Nikon store in Singapore.

The prospect of an official unveiling has been given further credence with a ‘coming soon’ badge added to the product on Nikon’s website – not something it has done with any of the other three lenses set for release later this year – although the lens isn’t currently available to pre-order online.

The lens has already been displayed in a mock-up form at Nikon’s official launch of the Z system in Tokyo, as well as at various trade shows since then, but if the reports are correct this is the first time it’s been spotted in a retail environment.

The optic is one of six lenses that were slated for release at the start of this year. Two of these – namely the NIKKOR Z 14-30mm f/4 S and NIKKOR Z 24-70mm F/2.8 S – have already materialized, while four further options (including the NIKKOR Z 58mm f/0.95 S Noct) are yet to make an appearance.

So what do we know about the NIKKOR Z 58mm f/0.95 S Noct so far? We can see the lens will share key design features with the NIKKOR Z 24-70mm f/2.8 S, with ARNEO and Nano Crystal Coat technologies on board, as well as a fluorine coat on the front element.

Like that lens, it will also be fashioned with separate control and focus ring, although this lens will be manual-focus only. And while official pricing hasn’t yet been disclosed, with a maximum aperture this fast we can be sure that you’ll need deep pockets if you want to get your hands on one.

Of course, ‘soon’ could mean anything from tomorrow to later this year. Back in December, images of the lens on social media led some to suspect the lens would shortly be available, although this never happened. The Nikon Z lens roadmap for the series (below) shows that the lens is due to make an appearance before the year is up.

The newness of the line has led to much speculation as to what direction Nikon will take next. The company has been rumored to be working on both a cheaper mirrorless body and a sports-oriented camera similar to the D5 DSLR, while an executive from the company separately claimed in an interview that lenses with maximum apertures faster than f/0.95 would be possible in the future.