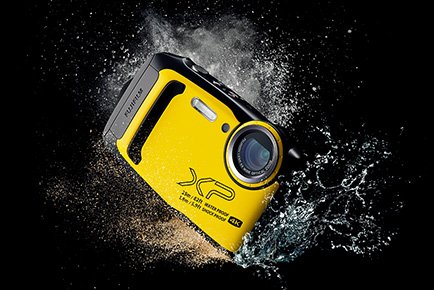 Fujifilm has beefed up its ultra-rugged FinePix XP compact camera family with the XP140. The beach-friendly pocket camera replaces the XP130 which is currently one of our top ten in our best waterproof cameras.

The XP140 can now taken 25m underwater – 5m deeper than its predecessor.  It can be dropped from a height of 1.8m, that’s an increase in shockproof capability of 5cm. It is dustproof too, and is freezeproof being capable of functioning at -10°C.

The key new feature is the introduction of 4K video shooting, whilst retaining a 16.4 megapixel back-illuminated CMOS sensor. Also improved is the ISO range – with the maximum sensitivity improve a stop to ISO12,800.

Available in five different colors (see the swipeable gallery above) the camera’s Fujinon lens has a 5x zoom range, equivalent to 28-140mm in 35mm terms, and boasts a built-in optical image stabilizer.

Other features include 10fps burst shooting and a newly installed electronic level, together with optical image stabilisation that’s designed to keep images crisp and videos stable.

Wi-Fi and Bluetooth have also been included on the XP140, which allow the camera to sync with smartphones and tablets and take advantage of the Fujifilm Camera Remote app that’s available for iOS and Android.

Fujifilm tells us that over six million XP cameras have been sold to date – of which the XP140 is the 14th family member.