Photoshop on the iPad is now available

Over a year after it was officially announced, you can finally use it.

It’s been over a year since Adobe officially announced that it was bringing Photoshop to the iPad, but today the company makes good on its promise to do so in 2019. Version 1.0 isn’t a full-blown version of the iPad app you’re probably expecting though. The first release primarily focuses on compositing and retouching tools — things like selections, masking, painting, blend modes and adjustment layers. There are some pretty useful tools in that list, but it isn’t the full extent of what Photoshop will be capable of on Apple’s tablets.

Adobe says it will add more Photoshop tools with each new release. And if you have something you’d like to see in the app, you can submit feature suggestions directly from the iPad software. There are still a lot of useful features in the initial version though, so you’ll be able to get to work using it, just be aware it probably won’t have everything you need right now. 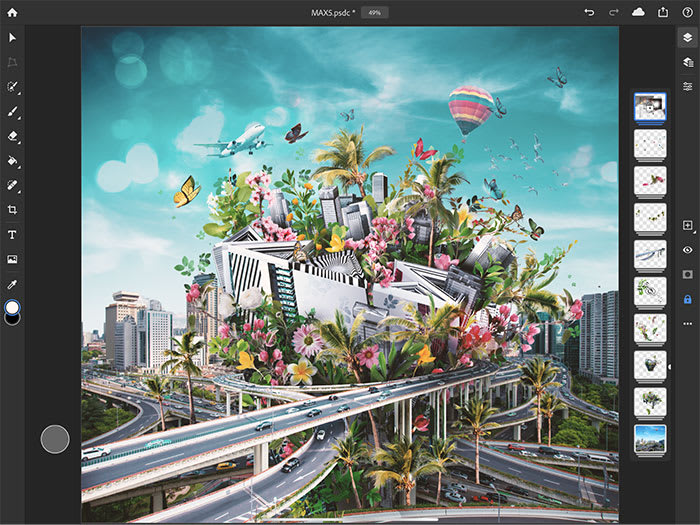 As far as the tools Photoshop on the iPad does have, you’ll be able to use full PSD compatibility and a familiar interface from the desktop Creative Cloud app. The workspace has been retooled for the iPad though, so you can view both simplified and detailed layers panels as needed — just as one example. Tools will display as you need them, including fast-access touch features, so you can harness the iPad’s functionality while also saving precious screen space. In terms of performance, Adobe says you’ll be able to work on large PSD files with “hundreds of layers” without any compromise in performance.

Like most Adobe mobile apps, all of your files will be accessible on the iPad through Creative Cloud. This means both PSDs and assets you need to create them will be within reach at all times. The files you create and update with Photoshop on the iPad will also sync to Creative Cloud automatically. Even when you’re not online, Adobe says you can continue work and things will sync when you’re connected again. And just like you see on the desktop, a home screen on the iPad app will offer quick access to files as soon as you open the app.