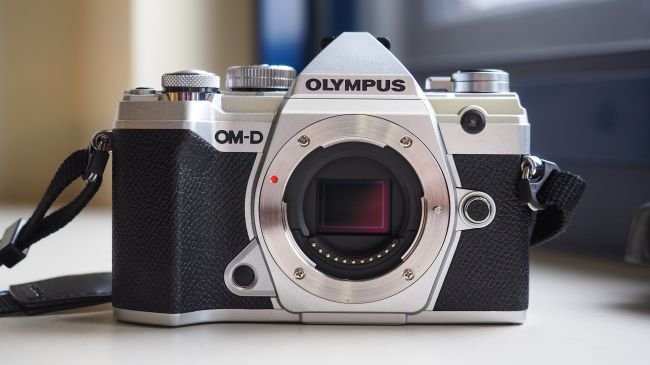 The Olympus OM-D E-M5 Mark III also boasts a number of features inherited from Olympus’ flagship E-M1 cameras, including the celebrated Pro Capture mode (enabling you to capture 14 frames before you depress the shutter, so you never miss an action moment) and a hybrid phase detect autofocus system.

The camera presents top-to-bottom improvements over its 2015 predecessor, the E-M5 Mark II, notably weighing 51g less despite packing so many upgraded features. Most pertinently, however, it also manages to out-spec the recently announced Nikon Z50 APS-C camera, outpunching its larger-sensored rival in almost every category from size and resolution to stabilization and weather sealing.

Living up to Micro Four Thirds’ promise of compact, capable cameras, the E-M5 Mark III is truly discreet at just 125.3 x 85.2 x 49.7mm, and weighs a deceptively light 395g (body only) thanks to its new polycarbonate construction.

In the hands it feels like the Mark II has lost a considerable amount of weight, but also done some extra shoulder rolls, being a tad thicker on the top. The camera is ever-so-slightly beefier, but a whole lot lighter – and, crucially, it still features class-leading IPX-rated weather sealing.

Also improved is Olympus’ industry leading in-body image stabilization. This has been increased to a base performance of 5.5 stops of stabilization, going up to 6.5 stops when paired with Sync-IS lenses (such as the M.Zuiko 12-100mm f/4 IS Pro lens) that employ the in-body and in-lens systems in conjunction.

Unlike previous E-M5 iterations, the Mark III eschews the chunkier BLN-1 battery in favor of the smaller, sleeker BLS-50 used by the Olympus OM-D E-M10 Mark III and the Olympus PEN E-PL9. Despite having a smaller capacity, however, Olympus promises that the “lifetime in still images is the same as with E-M5 Mark II”.

This means that we’re looking at a conservative 310 shots (closer to 360 in practice) to 750 shots (with Quick Sleep Mode enabled) per charge. And the battery can also now be charged via USB – such as a powerbank, phone charger or cigarette lighter adapter – when the camera is not in use.

In terms of video, the E-M5 Mark III can capture C4K at 24fps, 4K up to 30fps, and 1080p up to 120fps for slow-motion footage. All modes feel notably better in use, thanks to the increased 5.5 stops of IBIS and the improved autofocus – and vloggers will be pleased to know that there is a microphone jack.

While the camera doesn’t feature a new processor, the TruePic VIII chip has been updated to give it superior low light performance – to the extent that Olympus has increased the auto ISO upper limit by two stops, to ISO6400 from ISO1600.