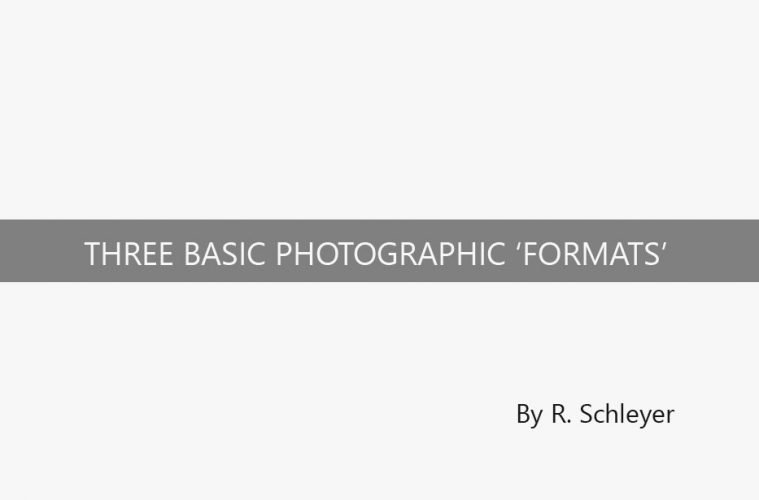 In photography, three kinds of “format” are basic to understanding photographic
practice. Two concern acquisition and the third, often neglected in discussion,
concerns output. Large- and small-format acquisition have existed for many years.
Large-format output using vertical enlargers (about 1920) was a great advance in
artistic photography.
The following exposition omits large-format acquisition—the sheet film of former
days and “medium-format” of yesterday and today. Equipment and lenses for this
have always been bulky and expensive, though of high art potential. Large-format
jet printers for artistic output have, however, achieved wonderful price reductions
in the last decade.

Presentations of museum-quality prints are rarely made but their possibility should
be the overarching goal of typical artistic photographic practice. Without the
necessary information (file size) to back up a photographic image it will prove
artistically useless. The minimum TIFF file size needed for large-format printing is
on the order of 100MB and may be even larger for 16×20 prints.
The inherent batch-process procedure of small-format roll-film (1913-2013) was a
severe limitation on its mode of acquisition until the advent of digital sensors.
Suddenly, with digital it became possible to individually expose and process
pictures as in the days of sheet film. This was a major artistic development often
omitted from discussion.
The “broad” end of small-format sensors (so-called “full-frame”) is relatively
expensive and bulky. The “narrow” end of small-format (APS-C and MFT) is
somewhat more tractable. It could be argued that MFT is the most convenient of
the available bases for small-format artistic acquisition and large-format printing. It
is used by the present author, mostly to photograph architecture and landscapes.
With reference to what can be set as a uniform minimum goal (the 11×14 or 13×19
print), the broad and narrow ways of small-format are opposed as a matter of
practice and convention—let’s call them the “high road” and the “low road” in
small-format artistic photography. One is easier and one is harder but they both can
get there.

The broad and narrow modes of small-format acquisition have been apparent and
seriously pursued since the days of roll film. Examples of the latter include the
Olympus half-frame and the Minolta 110. Half-frame and 110 demanded ultra fineThree
‘Formats’ (RS) November 2019
grain film development to achieve artistry. The APS-C/MFT side of small-format
today is equivalent to them in problems and potential. The broad road has always
been full-frame.
As mentioned, the goal of every acquisition format is museum-quality output in a
presentation print. Either of the small-format acquisition roads can reach the goal
but there is less room for mistakes with narrow-end small-format acquisition. In
general, ISO/film speed must be lower to achieve the highest print quality and, in
addition, to compensate for narrow-mode “mistakes” such as failure to use the
entire imaging area during composition and exposure.
With no departures from plan in composition (a big demand), and given average
scene brightness, broad and narrow small-format modes of acquisition often reach
equivalency in output and will yield artistically acceptable large-format prints,
though the acquisition path of choice to the largest customary size—16×20—is
often via the “high-road” (full-frame). With matting these are most impressive.