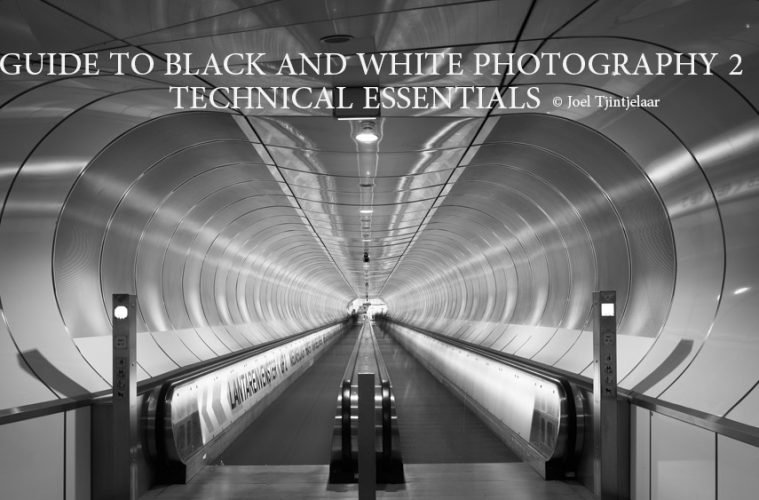 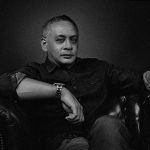 FROM BLACK AND WHITE TO COLOR AND BACK

Usually when we talk about converting to black and white we’re referring to the entire process from doing the basic conversion from color to black and white to the further processing of an image. It is important in the context of this article to separate ‘conversion’ from ‘processing’. Whatever phrase you prefer to use outside of this article, is entirely up to you, but I would recommend separating them to avoid confusion.

Conversion: the initial step to come from a raw color photo file to a neutral black and white version of it.

Processing: all other adjustments in photo editing software that doesn’t include a color to black and white conversion. Also applicable to color photographs. Of course. 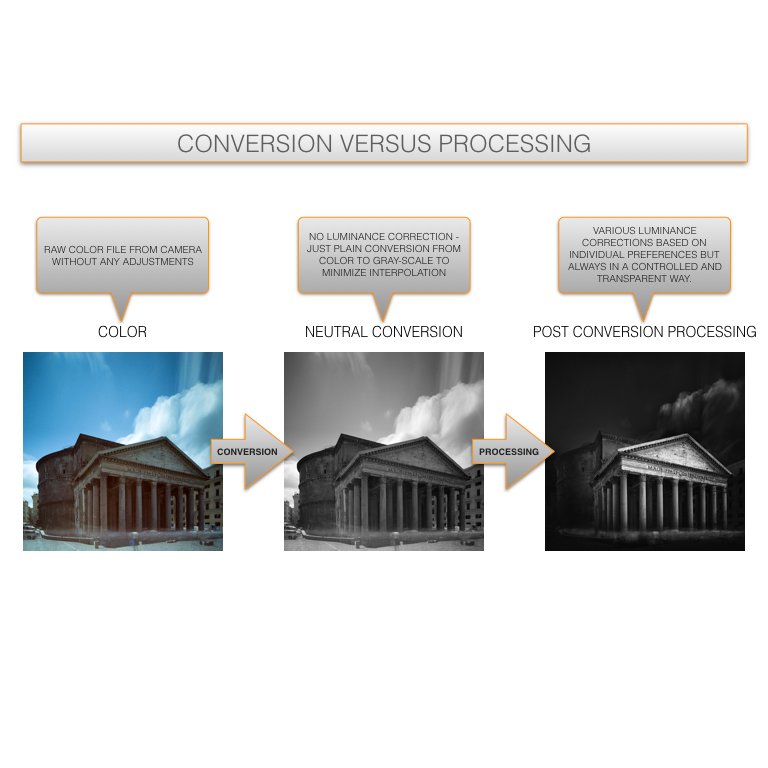 A schematic representation of what happens in the process of capturing a photo to presenting a photo in black and white or in color, to illustrate why the concept of separating conversion from processing to black and white is important 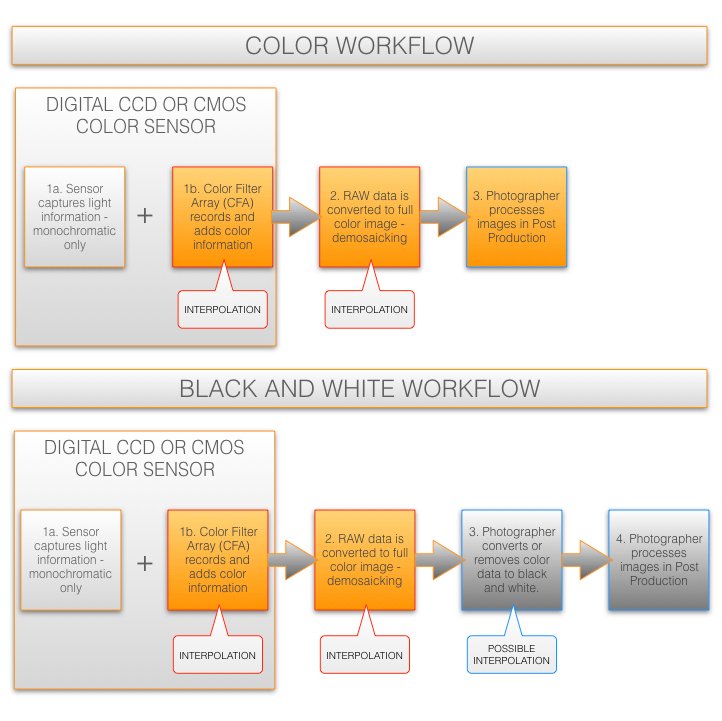 A visual representation of how an image is recorded with a regular sensor consisting of a Color Filter Array (CFA), and after that how it is processed within a color and a black and white workflow.

The visuals are representing the following: 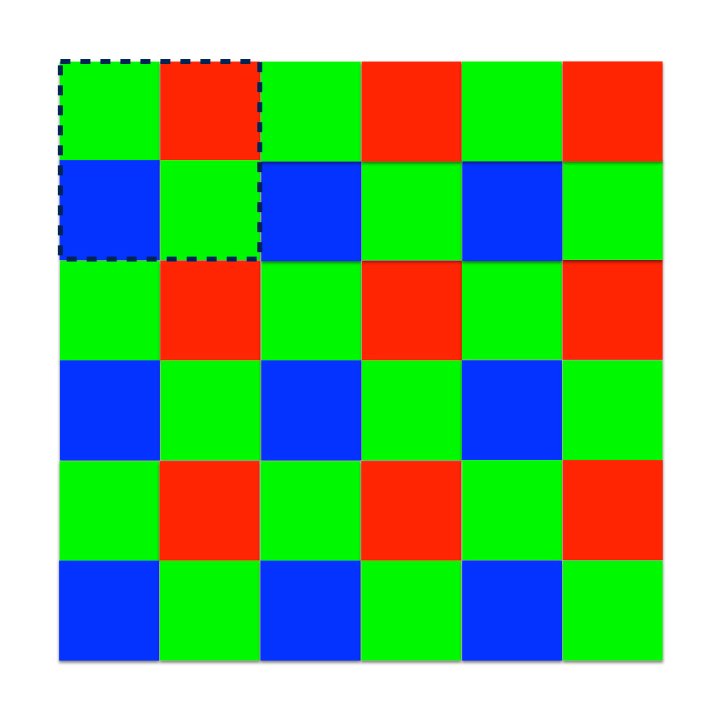 The Bayer filter is a physical layer placed on top of a CCD or CMOS photo sensor, containing a grid with a pattern of red, green and blue filters that can identify the various different wavelengths that represent the various colors. Each colored filter represents a pixel on a sensor and are literally placed on top of a pixel. In a Bayer filter there are always more green than red and blue filters since green filters are more sensitive, just like the human eye is more receptive for green. If for example light hits the red filter, it will only let through the red color component of that light and will discard the blue and green information. The discarded blue and green components will later be added through a demosaicking process that interpolates the missing colors to make up for a full color image. This implies that a color sensor will always miss 2/3 of the information per pixel that will later be guessed! The set of data, containing the red, blue and green data and the luminance values is the actual RAW data file and demosaicking is the process that takes place when we run a RAW file through the RAW converter in Photoshop for example. Despite the fact that demosaicking algorithms are very intelligent, it still is just an algorithm that can make very well educated and accurate guesses. Therefore it has its flaws that become more critical around edges of a photo and also in areas in an image where colors abruptly change. It is for this reason that a photographer working in black and white only, will benefit the most of a sensor that has no CFA and no interpolations will be part of the entire process. 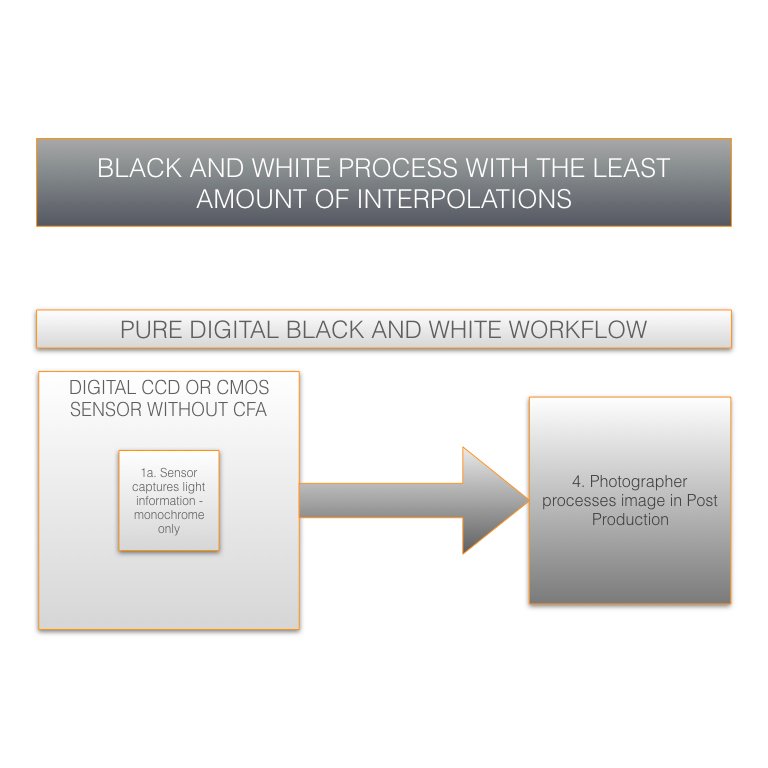 In some cases, as is the case with pure monochromatic digital sensors like the Phase One IQ3 achromatic or the Leica M Monochrom, all interpolations are canceled out even the interpolation in the blue callout. The result out of such a camera is the most neutral and least subjected to algorithmic interpretations and the conversion to remove the colors is eliminated. This is the most ideal starting point for a black and white photograph. Of course such a camera comes with a price, but I believe there should be a place for a monochrome camera only, in the marketing strategy of all mainstream camera manufacturers and not only in the strategy of high-end camera manufacturers like Phase One or Leica.

As stated earlier on in this article: with a black and white conversion I’m only referring to a method for making the actual one-off step, to come from color to black and white. The adjustments that take place after the image has been converted to Black and White, will be referred to as post-processing methods or steps. After all, you only need to make the step from color to B&W once, while post-processing steps can be done multiple times and always have as a goal to correct the luminance values.

What happens with most conversion methods is that they’re aiming to use the characteristics of a black and white photograph, namely the visible differences in luminance values, to create or suppress depth, while at the same time they’re selection criterion is its original color values. This is quite arbitrary since you change a luminance value based on a property, color, that gives no clear indication of its luminance value (see previous article) unless its stripped from its colors. And you may argue that in the end you’ll end up with the right B&W image anyway, so it’s irrelevant, but it’s simply a fundamentally wrong approach.

To minimise the number of interpolations  and to start with a neutral and ‘clean’ image, I’m suggesting here that the conversion method should preferably result in a neutral conversion without any luminance corrections that take place ‘behind the scenes’. Luminance corrections should only be part of the subsequent post-processing steps as an intended result.

Aim for an absolute neutral conversion that has no luminance corrections during conversion.

The overview of black and white conversion methods that is presented here can of course never be complete overviews since there are so many individual ways to create a black and white photograph from color and I surely won’t pretend I know all of them, nor do I want to discuss all of them. For every method I’ll try to select a representative set to get an impression.

Not part of this overview is an elaborate analysis of what the in-camera black and white conversion does, simply because there are too many cameras and more importantly: almost all of them, with the exception of a few that will be discussed here briefly, convert images to black and white in-camera to a JPG image. The same applies to all the apps and filters for mobile devices: I love what they can do but it’s also JPG. The quality of a JPG image is such that it’s not comparable to working with a RAW file and working in JPG will result in a loss of too much information that it’s simply not useful for high quality black and white post processing. But if you only want to use your photos for quick uploads to instagram or other social media and don’t intend to create fine art or other high quality images on printed paper, then that’s perfectly justifiable but then this article may not be for you.

TIP: to check if you have an absolute neutral conversion you can duplicate the converted black and white layer on top of the original color layer where it’s converted from. Then set the duplicated B&W layer to luminosity blending mode. This will result in a layer that should have exactly the same colors as the original color layer below. With no luminance differences.

There are as many processing methods as there are artists, trying to give an overview here would be impossible but roughly there are the following processing methods: using traditional darkroom tools such as dodge and burn only, methods that largely rely on presets and global adjustments like those available in Lightroom and Capture One. Methods that are based on a combination of traditional PS tools and Plugins like SEP2 and Topaz and finally there are methods like my method that are the practical reflection of one’s personal preferences. My method for example has a clear structure and underlying philosophy to make my workflow transparent and accessible to other aspiring artists. They’re not random tricks. More on my method can be found in my videos/books, and my most recent evolutions of this workflow starts from an absolute neutral conversion. In principle, the objective of post-processing is the adjustment of luminance values for the sake of artistic expression. Conversion methods should be irrelevant in this phase.  In the following overview I’m trying to list the most used tools for luminance adjustments, when they’re most useful and what I prefer.

Many people may wonder why I consider a tool or plugin that bases its conversion and processing on the original color information as a negative instead of a plus or even as neutral. To start with, you’re basing the end result on something that shouldn’t play a role in black and white. Moreover: the color information is interpolated information, now you’re using that for your B&W outcome! While I would recommend skipping as many interpolations as possible. Related to that, my personal B&W workflow is independent of the original color to avoid any interpolation. It is based on the basic elements of a photograph: light (or better yet: luminance values) and objects. If you base a black and white photo on those elements only then you have more subtle and also more local control over a photograph. More on this in my article on black and white processing techniques in the digital age. But also consider this: what if you have a black and white raw file only (such as from an achromatic back as the Phase One or Leica) or scanned a black and white analog photograph to process it in one of these tools? Then it’s obvious you can’t do much with the black and white adjustments features that are based on color only.

Finally, one might argue: perhaps converting to luminance values (black and white) based on colors is not the right way but since that will be followed up by color independent corrections, targeting luminance corrections only with color independent tools like the curves or dodge/burn tools, so all is still good? As long as you’re happy with the final results, then yes, all is still good. But you’re only adding more interpolations that will always deteriorate the image quality, and you may be happy with the end result, you won’t know what you have missed in additional and correct information during the process.

Considering that black and white photography is still being enjoyed by many people and actually never lost any of its allure and popularity, it is a question mark to me why not more camera manufacturers, also in the more mainstream pro-consumer market, aren’t offering pure black and white cameras. It isn’t a technical issue, it’s simply a matter of removing the CFA, so basically it should be cheaper. Granted, with a color sensor you are not limited to taking black and white photographs only and you can get close to the results of a black and white only camera, but it is definitely not the same. There are technical differences that indicate a loss in quality, but not only that, there are also differences in quality that can be very visible in critical areas. Simply due to all the interpolations that in fact aren’t necessary. As long as the mainstream camera manufacturers aren’t considering pure black and white sensors, and you can’t afford the Phase One Achromatic or Leica M Monochrom, then be sure to skip as many interpolations as possible to achieve a less compromised quality and start with a neutral conversion.